Fishing comes with techniques, supplies, and equipment. What you use may depend on the particular place you fish or what you hope to catch. Below, we offer some definitions of fishing methods and gear.

What Are the Types of Fishing Techniques?

Back Casting: Swinging the rod backward then forward. Proper back casting creates speed for the forward cast.

Blind Casting: Swinging and releasing in different directions, usually where the angler is unfamiliar with the waters.

Drift Fishing: Allowing the boat to drift with the natural water current so that the bait or lure floats along or just below the water surface.

Jigging: Moving lures up and down by jerking the tip of a rod.

Splitshot: A technique of using the line’s tension and bending the rod after casting to direct lures and bait.

Still Fishing: A technique of not moving bait once the line is cast. Still fishing uses soft plastic tails that can be replaced.

Trolling: Using the boat’s engine to move bait or lures slowly along the water.

Lures perform similar functions as bait. Unlike bait, lures are artificial. Types of lures include:

Bladebait: A form of crankbait lure that has triple hooks on each end, a flat spoon, and weighted notes. Bladebaits typically vibrate in the water.

Crankbait: Hard lures that can swim on their own.

Dry Fly: A lure that floats on top of the water and, thus, remains dry. Fly fishers use these types of lures.

Hard Bait: Lures made of hard materials, such as metals, hardwood, or hard plastics

Jigs: Weighted lures molded to a hook to promote up-and-down movement, or jigging.

Paddle Tail: A soft plastic lure with a paddle or disc-shaped tail that creates wiggling motions.

Plugs: Lures made of wood or hard plastic. Typically, anglers cast these lures, though some fishers may troll them.

Poppers: Lures that splash in the water to attract aggressive fish seeking food. Often, poppers have latex or plastic composition and are used in salt-water fishing.

Spinner Bait: Used especially around stumps, trees, and other structures. These lures appear as “safety pins” and have one end with a weighted body, skirt, and hook and another end with spinners. These blades rotate around a straight shaft.

Skirt: A lure with filaments, rubber, or nylon material with colors to attract fish. Other lures often have skirts as attachments.

Tube Bait: Soft plastic tubular-shaped lures with a weight placed in the hollow portion of the lure. Tube bait proves popular and very suitable for bass anglers and children or other beginning fishers due to the ease of use.

What Are the Parts of a Rod?

Blank: The basic pole, or backbone, of a rod (excluding butts and guides)

Butt: The end of a rod, at which a fisher usually grips the rod

Ferrell: A reinforced joint that joins pieces of a fishing rod

Guides: The eyes on a rod through which the fishing line is threaded.

Reel: The part of a rod that holds and spools the fishing line. Reels come with the following:

*Body is the foot, gearbox, support arm, and other components of the reel’s structure. The reel’s body is also known as its frame.

*Crank, which turns the spool

*Handle, which is rotated to turn the crank and pull or retrieve the line after casting from the rod

*Spool, the cylinder-shaped part that stores and holds the line when it is wound

What Are Tackle and Other Fishing Accessories?

Float: Sometimes called a “bobber,” this accessory suspends bait or lures at a particular depth in the water.

De-Hooker: A device or tool that removes hooks from fish.

Gaff: A long metal pole with a hook at the end for retrieving and securing fish too heavy to be pulled by a fishing rod.

Hook: J-shaped metal accessor with one end to catch fish and holed-end for threading fishing line from the rod. Specialty hooks include “stingers,” or “trailers,” which hook onto an existing one to lessen the chances of escape by the fish.

Leader: A type of line that connects the main line to a lure or hook. Leaders typically have more weight than the main line.

Line: String used for fishing. Lines come in materials such as nylon, wires, and braided fibers. Nylon lines are the most popular.

Mainline: The central line to which branch or leader lines containing hooks or lures are attached.

Sinker: A lead weight that pulls a lure or bait below the water surface.

Stinger Hook: A hook added or attached to a single hook on a lure to reduce missed fish strikes. Lines, swivels, direct connections, or chains afford the additions to the lure’s hook.

PrevPreviousHow to Store Your Bait and Lures
NextWhat Should You Wear When Going Fishing?Next 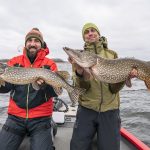 What Should You Wear When Going Fishing? 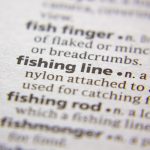 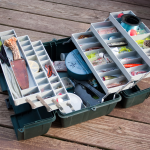 How to Store Your Bait and Lures