The Right Way to Release a Fish

In this article, find out the right way to release a fish back into the water after it’s caught.

“Fishing adds years to your life, and life to your years.”

You probably couldn’t agree more with that statement. There’s just something about being on the water, feeling the breeze, seeing the cattails swaying gently back and forth, feeling the sunshine on your face. And when you feel that telltale hit on your line, and you set the hook, and you reel in a beautiful trout, bass, or something else – well, life just doesn’t get any better.

That is, as long as you’re not a fish.

Releasing a Fish the Right Way

Let’s face it – for the fish at the end of your line, this isn’t exactly the best day of its life. So if you’re not planning on having fish for dinner, what’s the best way to release it so it can live a good, long life after your brief meeting? Following are a few tips to keep in mind.

How Should You Handle the Fish?

Put simply; fish can’t breathe out of the water. Removing a fish from the water can cause stress, internal injury, and suffocation. If it’s at all possible, keep the fish in the water while you remove the hook. Support it in a rubber net near the surface, or cradle it gently with your hand under its belly. Be gentle, don’t squeeze, and avoid touching the gills and eyes.

People often describe fish as “slimy,” and that’s because they are. That coating of mucus that covers their bodies is essential, as it helps prevent infections and disease, and it also helps them swim through the water with little resistance. So, when handling a fish – whether in the water or out – be sure to do so with wet hands or rubber gloves so as not to damage the fragile mucus coating. For the same reason, don’t use cotton gloves or a string net. And never lay the fish down on rocks, grass, or anything else.

What Kind of Hook Is Best?

Your tackle plays an important role in how successfully you release fish. It’s better to use catch-and-release fishing hooks, like circle hooks, whenever possible. And if you pinch the barb flat, it will be much easier to remove and will cause far less injury to the fish.

Which Fish Should Be Released?

Most fishermen decide whether or not to keep a fish based on its size. The bigger the fish, the better the story, right? But a fish that is gut-hooked is far less likely to survive than one that is lip-hooked. So, as long as the fish is over the legal size, good catch-and-release practice is to keep gut-hooked fish and release those that are lip-hooked.

You may be tempted to take a few pictures before you return the fish to its home. Remember, though, that when a fish is out of the water, it’s suffocating. For every second out of the water, its chances of survival decrease by another 10%. Hold it horizontally with your hand under its belly if you must take a picture, not vertically by its gills. Take your photo quickly, and return the fish to the water as soon as possible.

What’s the Proper Way to Let the Fish Go?

You might think that if a fish is tossed back and it swims away, it’s okay. That’s simply not true. Over 90% of fish fatalities occur after the fish swims off. If you’ve removed the hook successfully, you still have to actually release the fish.

Don’t just toss the fish away, but place it gently into the water, head first if possible. This will push water through the mouth and over the gills and help to resuscitate the fish. Before you let it go, be sure it’s ventilating – that is, be sure you see the gills opening and closing. If they’re not, face the fish headfirst into the current. The oxygenated water will pass over the gills and help it “catch its breath.”

There are many common myths about catch-and-release, and you may have even heard some from those who have been fishing for many years. But it’s always best to educate yourself on best catch & release practices. A healthy fish population is essential to the ecosystem, and if you release them correctly, your favorite fishing spot will remain robust and hardy for many years to come! 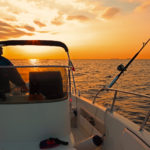 Safety Tips When Fishing And Boating 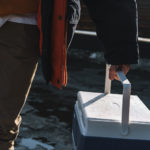 How to Keep Fish Fresh After They’ve Been Caught 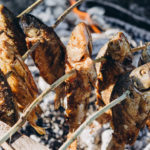 Ways Of Preparing Fish Over A Campfire